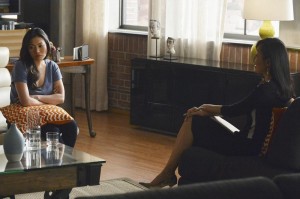 Joss has never really had great luck when it came to relationships, opting to focus on having fun rather than establishing meaningful connections with those she shares her life with. It was a philosophy that provided her with a lot in the way of experience, but it was a defense mechanism that kept her heart guarded and her life seemingly impenetrable, a way for her to avoid the pain of rejection while still getting what she wants. Her time with Alex showed her just how lonely for companionship she is and how she still had several steps to make before she became ready for an intimate relationship that went beyond sex, but could Joss be ready to give love another try?

On tonight’s episode of Mistresses, Joss attends a charity event with the intention of acquiring new clients and doing the networking necessary for her business to grow. What she finds, though, is a handsome plastic surgeon with whom she hits it off. While Old Joss would have no problem picking him up and doing what she had to in order to get what she wanted, New Joss is more focused on her career and building a future for herself, but having not met anyone she deemed worthy to spend time with since Alex, this could be her big opportunity to prove to herself and those she loves that she’s matured, that she’s ready to take matters of the heart seriously and slowly. But with her busy schedule, does Joss even have the time and mental energy to begin a new relationship?

Elsewhere on Mistresses, Savi forms an unexpected connection with Zack, while Daniel meets April’s friends for the first time and Karen decides to do something about her bad luck in the dating world.

Do you think Joss will be willing to pursue a new relationship, considering what happened with Alex and how busy her career is? What type of connection will Savi form with Zack and why do you think he showed up to her house in the first place? Is Karen wise to make this bold a change to her dating life?