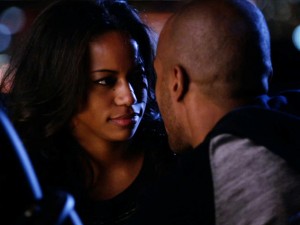 Ahsha thought that she could have her cake and eat it, too. She would keep her spot on the Devil Girls while getting to be with Derek; she had the good girl image and the coveted bad boy superstar. However, Jelena finally pieced together how to catch her in the act and has the bomb necessary to destroy Ahsha’s professional reputation. The only questions are when she’s going to use it and whether Ahsha has evolved enough in her time on the squad to outmaneuver Jelena and minimize the damage an exposure could do.

On the next episode of Hit the Floor, Ahsha and Derek get blindsided with news of their relationship going public on TMZ, something that should be the finishing blow to Ahsha’s brief dancing career and add to the mystique of the great Derek Roman. Jelena is the only Devil Girl permitted to be with players and she’s more than willing to flaunt that status to each and every member of the squad, but what she’s forgetting is the fact that Oscar cares about nothing more than money. If this news about Ahsha and Derek can fill up the stands and keep the team in the headlines, especially if Terence continues underperforming due to his knee injury, it might be worth bending the rules just this one time, in his mind. But would Ahsha continue seeing Derek when she knows that everyone else knows about their relationship and how the beginning of their time together was a secret?

Elsewhere on Hit the Floor, Jelena falls victim to one of her own moves, while Kyle inches closer to paying Beau off and a setback plagues Sloane’s investigation of the Devils organization.

Will Ahsha’s relationship with Derek survive such a public exposure? What will Beau do now that the woman he likes is almost ready to free herself of him? Is Sloane getting in too deep with her investigation?