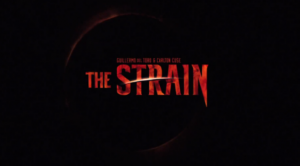 FX has released a series of teasers for upcoming vampire drama The Strain, one of two hour-longs it’ll be premiering this summer.

Based on the series of novels by Guillermo del Toro (Pan’s Labyrinth) and executive produced by Carlton Cuse (Lost), The Strain follows Dr. Ephraim Goodweather (Corey Stoll), the head of the CDC Canary Team in New York City. After being called in to investigate a viral outbreak, Goodweather and his team discover that said outbreak has hallmarks of an ancient strain of vampirism, a finding that will forever change the course of human history. Ephraim and the rest of the Canary Team must now work to locate the cause of the outbreak, figure out a cure while saving as many lives as they can, and save the city before it’s completely taken over by the infected.

In addition to Stoll, The Strain stars David Bradley (Harry Potter and the Prisoner of Azkaban) as Professor Abraham Setrakian, a Holocaust survivor turned pawn shop owner who may possess important answers concerning the outbreak; Mia Maestro (The Twilight Saga: Breaking Dawn – Part 2) as biochemist Dr. Nora Martinez, who becomes a fearless warrior when encountered with the reality of the outbreak; Sean Astin (Lord of the Rings: The Fellowship of the Ring) as CDC Administrator Jim Kent, a man who works alongside Ephraim and helps contain the outbreak; Kevin Durand (X-Men Origins: Wolverine) as Vasiliy Fet, a Ukrainian rat exterminator who joins the war against the vampires; and Robert Maillet (Sherlock Holmes) as the Master, one of the seven ancient vampires.

The series premiere of The Strain is set to air Sunday, July 13th at 10:00 on FX. You can check out a full list of FX and FXX summer premiere dates here.

Will you be watching The Strain? Do the teasers released thus far match the vibe of the source novels? Is FX wise in putting this show on Sundays against a heavy onslaught of cable competition?