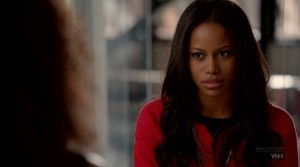 Ahsha Hayes wanted excitement. She wanted passion, fire – something different than the comfort she was used to for so many years. Ever cautious, it took a giant leap of faith for her to even audition for the Devil Girls in the first place, so while you knew she had it in her, that adventurous streak was something that only came in fits and spurts. Until she couldn’t deny the way she felt about Derek, which led to the end of a stable, loving relationship with German and the beginning of her life as a player’s girlfriend. However, Ahsha thought she would get to be with this gorgeous man with all the money and fame in the world and it would all be hunky dory; she’s get to indulge herself while bonding with someone who knew the ins and outs of the lifestyle she was living. What she didn’t realize, though, was that being Derek’s girlfriend, especially when the two can’t take their relationship public, isn’t all it’s cracked up to be.

Listed below are the dates, titles, and descriptions of the next three episodes of Hit the Floor.

Monday, June 9th – “Behind the Back”
A stunning development marks Sloane’s investigation. Meanwhile, Jelena gets the upper hand on Ahsha; Terrence makes a huge decision; Jude and Zero team for a scheme; and Lionel’s true motives are exposed.

Monday, June 16th – “Full-Court Press”
Ahsha’s position with the Devil Girls is put in jeopardy, but an unlikely source emerges to help. Elsewhere, Jelena falls victim to her own moves; Kyle and Beau inch toward the finish line; and a setback plagues Sloane’s investigation.

Monday, June 23rd – “Shattered Glass”
A storm blows in just as Jelena and Kyle must face unwanted visitors from their pasts. Elsewhere, Ahsha confronts the reality of being Derek Roman’s girlfriend, and Sloane recruits a new ally.

What unlikely source will help Ahsha keep her position at the Devil Girls? Does Kyle getting an unwanted visitor mean Benny’s coming back to town? Who will be Sloane’s new ally in the Devils organization and can they help her procure the information necessary to bring down Oscar?