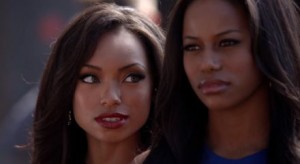 Ever since Ahsha stepped on the floor, Jelena has been gunning for her. Whether it be professional jealousy or insecurity at the thought of not being the focus of the Devil Girls for the first time in four years, Jelena’s relentlessness is something to be both admired and feared, yet Ahsha doesn’t seem to want to retaliate. Jelena could handle a battle of wills with the Devil Girls newbie, but she doesn’t know what to make of somebody not fighting back and avoiding conflict whenever possible. That doesn’t mean that Jelena is any less focused on getting Ahsha off this squad, though. She just has to go about it in a different way.

On the next episode of Hit the Floor, Zero inquires just why Jelena, who has been in control of the Devil Girls for years, deems Ahsha to be such competition. What he doesn’t know is that Ahsha has grown smarter and less naïve since she entered the Devils organization, meaning that Jelena can’t simply raise enough hell to run her out of town; she has to go about this more intelligently, especially since she knows about the relationship with Derek and can use Sloane’s presence as the ultimate weapon. Ahsha and her mother might not be as close as they once were, but seeing Jelena going after Sloane might be the thing to force her to engage in this feud, which plays right into Jelena’s strengths. And while Jelena can go cerebral in her battles with aspiring Devil Girls, she feels like she’s ready to deliver the knockout blow and something like exposing Ahsha’s relationship would be far too easy a card to play.

Elsewhere on Hit the Floor, a stunning development marks Sloane’s investigation, while Terrence makes a huge decision that will impact his playing career, Jude teams up with Zero, and Lionel’s true motives in returning to Pete’s life are exposed.

Why do you think Jelena can’t let go of this competition with Ahsha? What type of decision will Terrence make and will it be a positive thing for his playing time? How will Pete react when he learns the real reason Lionel’s back in his life and messing with his relationship?