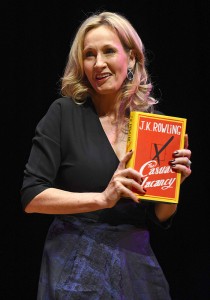 HBO and BBC have announced the casting for a miniseries adaptation of J.K. Rowling’s The Casual Vacancy.  The cast will include Michael Gambon, Julia McKenzie, Rory Kinnear, Keeley Hawes, Monica Dolan, and newcomer Abigail Lawrie.

An adaptation of Rowling’s 2012 bestselling book, and her first adult novel after the Harry Potter franchise, the miniseries is a joint production of BBC One and HBO.  The series will comprise of three one-hour parts, with production scheduled to begin in July in South West England.

The Casual Vacancy centers on the seemingly idyllic English village of Pagford, however, behind the quaint facade is a town at war: the rich with the poor, the teenagers with their parents, wives with their husbands, and teachers with their students.

Gambon (Dumbledore in seven Harry Potter installments) is set to play Howard Mollison, owner of the village’s delicatessen.  McKenzie (Shirley Valentine) plays his wife, Shirley. Mollison’s son Miles will be played by Rufus Jones (Bill), and his wife Samantha is being played by Keeley Hawes.

The miniseries is being written by Sarah Phelps (BBC’s Great Expectations) and will be direted by Jonny Campbell (In the Flesh).