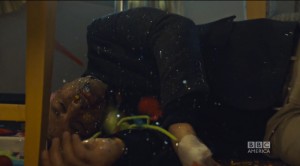 While Sarah has been off chasing information about the origins of the clones and Cosima has been focusing on figuring out how to combat her illness, Allison has been alone with her guilt over Aynsley’s death and her unease over Donnie being her monitor. The lack of support has certainly been weighing on Allison, to the point where she’s even more guarded than she was and her feelings of hopelessness and loneliness have increased. Though being trapped in rehab could have ultimately broken her, she did find something of a shoulder to lean on in Vic, perhaps the least likely ally she could have imagined. Or at least she thought she did.

On the next episode of Orphan Black, Allison finds herself betrayed by Vic, whose loyalties lie only with himself as he’s using her to get the charges against him dropped. Having pushed away her friends, not being able to trust Donnie, and without the support of Sarah and Cosima, Allison understandably falls apart, feeling as if she’s at a dead end. And the worst thing about her breakdown, aside from the physical and emotional effects it’ll have on her going forward, is that it occurs on the eve of Family Day, thereby endangering the amount of time she gets to see her children. Though they were always important to Allison, the two are now the only thing she’s got going for her, in her mind, and taking that away could cause an even more serious emotional collapse that she might not be able to recover from. Can Sarah and Cosima adequately contain the fallout from Allison’s collapse and keep their sister from losing all hope in ever leading a normal life again?

Elsewhere on Orphan Black, Siobhan confronts Dr. Leekie, while Ethan faces Rachel for the first time in years and Cosima gets into it with Delphine regarding their researching into the former’s illness.

Do you think Allison will be able to pull it together after the betrayal from Vic? How will Rachel react to being in the presence of her father? Will the research into Cosima’s illness ultimately tear her and Delphine apart?