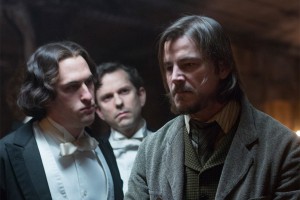 While Sir Malcolm has not made much in the way of progress when it comes to rescuing his daughter, he’s yet to give up hope. If anything, the lack of answers has made him hungrier to find Mina and wrestle her away from the clutches of her otherworldly captor. Granted, Malcolm has other things on his plate, namely the knowledge that Vanessa is being pursued by the Devil himself, but he can only worry about that when it becomes a more pressing issue; instead, he must focus his time and resources on aligning the team necessary to bring his daughter home and restore peace to London.

On the next episode of Penny Dreadful, Malcolm hires Professor Abraham Van Helsing to collaborate with Victor in order to suss out a cure for the disease afflicting Mina. Malcolm’s thinking is that should they be able to cure Mina, rescuing her will be easier, as she’ll be fighting for her freedom just as hard as they are; however, not only is this line of thinking dangerous, in that free will could land Mina in an even more precarious situation than the one she’s already in, it’s impossible, since Victor and Van Helsing don’t even know what disease they’re looking to cure. A disease with this kind of symptom is a medical abnormality, something even the brightest minds in England have yet to encounter, and asking two men to pull out a cure for something no one even knows exists is an awfully tall order. And then there’s the time crunch that comes with having Fenton in captivity, a pressure that will only intensify when the creature summons his master and brings him to Malcolm’s doorstep.

Will Van Helsing be able to help Malcolm in his quest to cure the disease afflicting Mina? Can Malcolm’s team effectively neutralize Fenton’s master? What will result from Vanessa’s infatuation with Dorian?