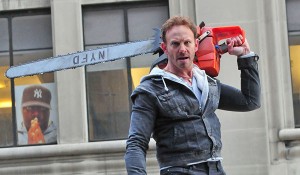 Leading up to the premiere of Syfy’s Sharknado 2: The Second One, the network will be programming its first ever “Sharknado” Week.

Shark-related programming during the week will include Mega Shark vs. Mecha Shark, Sharktopus vs. Pteracuda, and Sharkmania: The Top 15 Biggest Baddest Bloodiest Bites.

Last summer Sharknado became a Twiter sensation, prompting roughly 5,000 tweets per minutes at points.  The film’s sequel will unleash a Sharkado on New York City and its most loved iconic sites.  Ian Ziering and Tara Reid will return to starring roles.