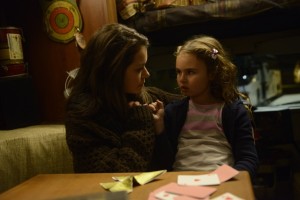 After Sarah learned about the existence of the clones, she looked to other aspects of her life for stability. Felix was always there for her and only grew closer to her in midst the chaos and Sarah assumed that Mrs. S was the same woman she always knew growing up, someone who might be emotionally distant but with whom she could be herself and who she wouldn’t have to worry about. However, at the birdwatchers’, Sarah caught a glimpse of the Mrs. S she doesn’t know and finally realized that the woman who took her in has as many if not more skeletons in her closet than she does herself.

On tonight’s episode of Orphan Black, after escaping the crash, Sarah enlists Cosima to help her dig for answers about the origins of the clones. What becomes clear, though, is that Siobhan knows more than what Sarah thought and that her former caretaker might be the key to figuring out who she is and where she came from. But Sarah’s seen that Mrs. S is quite dangerous and it might not be best to approach her with accusations regarding the experiment and her involvement/knowledge of Project NEDA. At this point, though, it could be worth the risk, especially since Siobhan told Sarah herself that she’s always been on her side. Sarah needs to find the answers that could help each of the remaining clones and if she can harness Siobhan as a weapon rather than have to fight against her, finding those answers might be easier than she expected.

What do you think Sarah will find about Siobhan’s connection to Project NEDA? Just how much information has Mrs. S been withholding from Sarah? Will what Sarah and Cosima find help the latter figure out how to combat her illness?