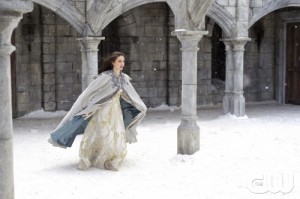 The rift between Francis and Mary once seemed surmountable, something they would be able to conquer together due to the love they have for one another and the emphasis they’ve placed on their relationship. Both the Dauphin and the Queen of Scots wanted so badly to make different choices than their parents, to show that there’s a way for an alliance to be made that doesn’t result in a stilted, loveless arranged marriage, but as much love as there might be in their marriage, it can’t contend with the duties each have to their respective country. While this has already resulted in Mary being locked in the tower to keep her from venturing back to Scotland, could things possibly get worse for the future King and Queen of France?

On tonight’s episode of Reign, Mary’s uncle, the Duke of Guise, arrives in France to inform Mary that Scotland is surrounded on all sides, with Marie’s rule looking to end shortly. Francis argues that Mary shouldn’t trust anything that comes from the Duke of Guise, seeing as how he could have ulterior motives in luring Mary back to Scotland, but this gets at the primary issue between the newlyweds; Mary has responsibilities to others than herself and if her country is in danger, she must attend to it, regardless of what it means for France. She didn’t get involved in this marriage to merely become the Queen of France – her role in the alliance is to make sure France has Scotland’s back and vice versa and right now, Francis is reneging on their deal and putting Mary’s country in danger.

Elsewhere on Reign, Henry hatches a doomed plan to claim the English throne for himself, while Bash and Kenna’s marriage continues to solidify as the trust between them grows.

Do you think Mary will be able to trust her uncle, as well as the information he provides her? Will Francis be able to stop Henry from executing his plan before it’s too late? Is Kenna going to emerge as Bash’s most trusted ally in the castle?