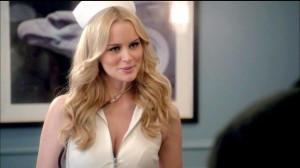 TVLine is reporting that 666 Park Avenue alum Helena Mattsson has joined the cast of ABC summer soap Mistresses. She’s set to recur as edgy European supermodel Greta Jager, who launches a restaurant with Scott (Justin Hartley). Greta is said to call Joss in as the venue’s in-house event planner and before long, Joss begins exerting her influence on the place.

It seems likeliest that Greta, Scott, and Joss will be involved in some type of complicated romantic situation that tests the latter’s newfound desire for commitment and the boundaries of her sexuality that were pushed last season. You have to wonder if Joss will be trying to put her relationship with Alex, as well as the questions she has about her sexuality, behind her, but in this situation, she could get the best of both worlds. She would be able to explore her attraction to women through a sexual relationship with Greta while not completely giving up on men by fooling around with Scott, assuming both parties are knowledgeable of the other’s involvement with their event planner. But after everything that Joss went through with Alex, will she be content with a purely sexual arrangement when she had a taste of something more?

In addition to her role on the ABC supernatural soap, Mattson has appeared on the likes of Betrayal, Nikita, and Breakout Kings. She can next be seen in two upcoming episodes of FX miniseries Fargo.

Will you be watching Mistresses this season? How do you think Joss and Greta’s working relationship will progress during season two? Could the two possibly be involved in a love triangle with Scott, making their time at the restaurant all the more uncomfortable?