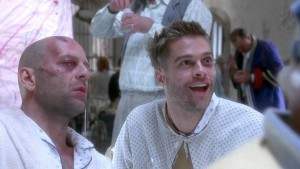 Deadline is reporting that Syfy has picked up its television adaptation of 1995 Bruce Willis film 12 Monkeys to series, with the 12-episode first season set to premiere January 2015. Written/co-executive produced by Terry Matalas & Travis Fickett (Nikita), 12 Monkeys tells the story of a time traveler from the post-apocalyptic future who appears in present day on a mission to locate and eradicate the source of a deadly plague that will eventually decimate the human race. Natalie Chaidez (Terminator: The Sarah Connor Chronicles) will act as showrunner.

The move to pick up 12 Monkeys comes after the network picked up a second season of Ron Moore’s Helix and reentered the world of long-form storytelling with event series Ascension, a space opera that premieres later this year. Per a report last month by The Hollywood Reporter, Syfy is said to be in the early stages of something of a network rebrand, as they reembrace “hard” sci-fi in the vein of Battlestar Galactica and turn away from the lighter tone of projects like Eureka and Warehouse 13. In the case of 12 Monkeys, it will be assuming the mantle of Being Human, which airs its series finale this coming Monday; High Moon, a space drama from Bryan Fuller (Hannibal, Pushing Daisies) that was the other project the network had in development, will not be going forward.

12 Monkeys stars Aaron Stanford (Nikita), Kirk Acevedo (Oz), Zeljko Ivanek (Damages), Robert Wisdom (Nashville), and Noah Bean (Once Upon a Time). You can check out a trailer for the film version below.

Will you be watching 12 Monkeys? Do you like the change in direction from Syfy? What other hard science fiction projects would you like to see the network pick up?