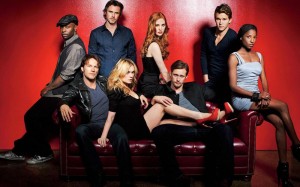 HBO has announced that the final season of True Blood is set to premiere Sunday, June 22nd at 9:00, with the series premiere of the television adaptation of The Leftovers premiering Sunday, June 15th at 10:00. The first teaser for The Leftovers will be available Sunday, April 6th.

Adapted for television by Damon Lindelof, The Leftovers is based on the novel of the same name by Tom Perrotta, who also serves as executive producer on the series. and tells the story of a Rapturous event occurring and those who were left behind in a suburban community. To be the fourth new HBO series of 2014 following True Detective, Looking, and Silicon Valley, The Leftovers stars the likes of Justin Theroux (Tropic Thunder), Amy Brenneman (Judging Amy, Reign), Christopher Eccleston (Doctor Who), Liv Tyler (Lord of the Rings: The Fellowship of the Ring), and Ann Dowd (Compliance).

True Blood’s conclusion is the first of three planned series finales for HBO in 2014. After the Emmy-nominated horror series takes its final bite this coming fall, both Prohibition drama Boardwalk Empire and Aaron Sorkin vehicle The Newsroom will end their five and three season runs, respectively. HBO has already made the first steps toward replacing their considerable roster by picking comedies The Brink and Ballers and drama Utopia up to series for bows in 2015.

You can check out the first teaser for True Blood‘s seventh season below.

How do you think True Blood will end? Will The Leftovers be a solid match for the expiring vampire series? Should The Leftovers stick more closely with the events of the novel or should it forge its own path after a while?