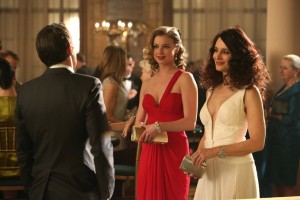 Emily Thorne was able to secure a public break from the Graysons by leaking her medical records to Voulez and making it known that she faked her pregnancy. It was a move that showed just how dedicated she is to exacting justice for her father, a move that should bring Stevie Grayson more into the fold now that she knows where Emily’s loyalties truly lie. While Emily’s newly single status should be an asset in her quest to bring down the Graysons, there’s the matter of Daniel still seething over the perceived affair with Aiden; Emily assumed that the Graysons feeling as if they won against her would lower their defenses and give her an opportunity to regroup and strike back, but what if Daniel chooses instead to go on the offensive?

On tonight’s episode of Revenge, Daniel pledges to go after Emily’s friends now that he realizes his soon-to-be-ex-wife’s eyes are less on the Grayson fortune and more on the foundation of the Grayson family. Emily wants to bring down the Graysons by any means necessary and since her plan was interrupted by her string of blackouts, Daniel has the opportunity to strike back and make himself the latest obstacle Emily has to either navigate around or destroy. We’ve seen Daniel’s anger toward Emily bubble up several times in recent episodes, but could it go from being a strong motivator for his own sort of vengeance to a liability? If Daniel is only able to focus on the act of revenge and cannot see the full picture, he risks bringing the type of harm to himself and his family that Emily has dreamed of ever since her own plan came into fruition all those years ago.

Elsewhere on Revenge, Pascal looks for a way to reconnect with Victoria.

What will Emily find out about Pascal’s connection to her father? Is Daniel a legitimate threat to Emily’s friends? Will Victoria find herself falling for Pascal again?