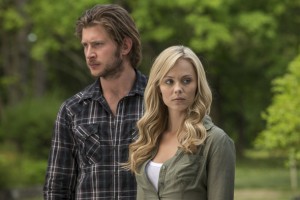 Elena thought that she was going to get a reprieve from Pack business thanks to her art show opening getting moved up. As much as she loves Stonehaven and all those who inhabit it, continually fighting over territory and always being on the defensive is absolutely exhausting and something she never thought she would have to deal with again. However, she’s in the center of a Pack vs. Mutt war that’s only just beginning, meaning that she can’t simply hurry home for a weekend of reconnection with Philip; she’s always got to have in the back of her mind the possibility that a Mutt could follow her to Toronto and attack or that this could be the last time she sees her boyfriend. It’s a hard way to exist and yet Elena is going to have to continue dealing with the emotional hardship if she hopes to continue protecting Philip.

On the next episode of Bitten, Elena returns to Toronto with Clay at her side on the orders of Jeremy. It makes sense that he would want to keep what remains of the Pack as tight as possible, if only for the possibility of a Mutt attack, but while Elena’s physical safety might be taken care of, it’s her relationship that could suffer the most damage in this trip to the city, since Philip only knows of Clay as one of Elena’s seemingly endless array of cousins. Though he might have believed that not even a month ago, the necklace on his video and Elena weaving in and out of his life as she pleases has his antennae up and the slightest hint of sexual tension between Clay and Elena will confirm his suspicions that she’s cheating on him. But even if he does find out about Clay and Elena, will Philip chalk it up to her past causing her to self-sabotage or will he stand up for himself accordingly?

Elsewhere on Bitten, an unexpected source provides the Pack with information that could prove advantageous in their war with the Mutts.

Will Philip find out about Elena’s romantic history with Clay? Should Elena break up with Philip to protect him from any future Mutt attacks? Who do you think will assist the Pack in their war with the Mutts?