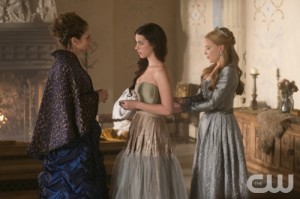 Mary’s heart and head have not been in agreement for much of her time in France, as her conflicted feelings for both Francis and Bash were made all the more complicated by the prophecy of the former’s demise from Nostradamus. As much as Mary would have liked to pursue the arranged relationship with the French Dauphin, she wouldn’t be able to live with herself if she was responsible for his death, so she pushed him away in hopes of sparing his life and giving him the chance to find happiness outside the castle walls. This should have cleared the way for an easy relationship with Bash, who Mary has grown quite fond of since using her leverage to spare his life and insert him back into the line of succession, yet on the next episode of Reign, the moment of truth has caused some lingering doubts to resurface.

Not helping her decision on which royal brother to marry is the fact that Francis has returned from Burgundy House with Lola at his side and little warmth toward Mary. He claims that he’s only at the castle to keep his father from carrying out his mother’s execution, but seeing Francis after so much time apart, especially as she nears the time to wed Bash and make her position at court official, has turned Mary’s thoughts toward her feelings for him and how she’s yet to move on from their relationship. It wasn’t even anything that either of them did that broke them up – it was the fates manifesting themselves through Nostradamus and pointing toward the ruin that they would face if they got together that drove the wedge between them. While Mary and Francis have done their best to put their time together in the past, the former cozying up with her former lover’s brother and the latter building an emotional wall around himself, there’s a chance that, given the pressure on her shoulders and the realness of her feelings for the Dauphin, the former will opt to give things another try, prophecy be damned.

Elsewhere on Reign, Mary’s mother Marie de Guise visits the castle with her own agenda for her daughter, while Henry and Catherine each have their own ideas as to who will rule France in the future.

Who do you think Mary will wed – Bash or Francis? What will Marie’s agenda for her daughter consist of? How will Mary’s decision, whatever it may be, impact the future of France and the royal line of succession?