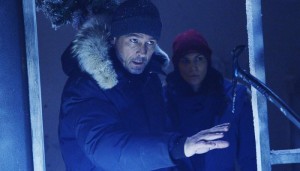 All Dr. Sarah Jordan wanted to do was make a difference in her field and leave a lasting mark as something of a reward to herself for her hard work. However, before she could accomplish any of the goals she set for herself and witness the evolution of the medical field, she received her cancer diagnosis, which has effectively cut her life span short and stifled her ability to perform even the most rudimentary of medical tasks. It might be understandable that she decided to withhold said information out of a desire to be seen as just another doctor, yet it’s only hurt her and those around her in the end, as she’s likely too far gone to do anything about her diagnosis now and she hasn’t been up to par when the rest of the CDC team needed her to perform.

On the next episode of Helix, Sarah undergoes a scan now that Alan knows about her condition. Thanks to her breakdown in front of Hatake, who saw the scar down her back that Alan somehow missed, she’s now become the patient that she never wanted to be in front of her colleagues. However, she has bigger concerns than her professional reputation when she experiences vivid, horrifying hallucinations while undergoing the scan and learns afterwards that the cancer is likely working its way from her spinal cord up to her brain. Sarah knew that she didn’t have a whole lot of time left, but she thought she had more than this, more opportunities to prove her validity as a researcher and value as a member of the CDC team. Now, though, she’s staring at her own mortality and the possibility of becoming a burden on Alan and Julia rather than an important cog in their journey toward answers and an eventual escape from Arctic Biosystems.

Elsewhere on Helix, Alan and Julia travel to an abandoned satellite station with the hopes of calling for help, while the truth about Hatake’s plan and Julia’s condition is revealed.

Will Sarah make it out of Helix’s first season alive? Are Alan and Julia going to be able to call for help at the station? What do you think the truth is about Hatake’s plan and Julia’s condition?