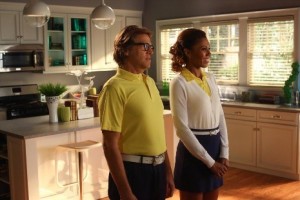 With Debbie going back to college, her relationship dynamic with Marty will be changing, though not necessarily for the worse. The main stumbling block in Debbie’s newfound drive is that she’ll be pulled from the home more and might not be able to spend as much time with Marty as she would like, meaning that rather than have the other at their disposal, the two will need to block off time where they can be together as a couple. Not a mom and dad, not as heads of a household – as Marty and Debbie, two people who fell in love decades ago and want to preserve their feelings for one another. But planning a night together is one thing and having it go exactly according to script is something else entirely.

Listed below are the dates, titles, and descriptions of the next three episodes of The Neighbors.

Friday, February 28th – “Oscar Party”
Debbie finally joins a popular social media outlet and starts friending her old friends from Bayonne. Because she and Marty have lost touch, the Weavers decide to throw an Oscar party and invite everyone to reconnect. When the Bird-Kersees hear about the festivities, they decide to make themselves indispensable to the Weavers by turning the house into the most lavish, over-the-top Oscar party.

Friday, March 7th – “Balle Balle!”
Marty and Debbie are worried when Larry Bird tells them his Indian co-worker at the coffee shop has invited him to a traditional Indian wedding. Despite their pleas, Larry decides to attend without their approval and he and Jackie get carried away when trying to come up with a wedding gift. After Larry does research on Indian weddings, he concludes all weddings take place in “Bollywood” and decides to give his friend a full scale Bollywood number.

Friday, March 14th – “A Night in (Lou Ferrigno’s Hibachi) Heaven”
Marty and Debbie are feeling like they are in a rut, so Marty plans a date night, but it turns out not exactly as Debbie envisioned it. Meanwhile, Dick falls madly in love with the new babysitter (guest star Rachel Dratch).

The Neighbors airs Fridays at 8:30 on ABC.