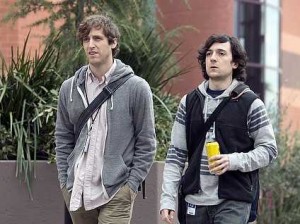 HBO has released new previews for the fourth season of Game of Thrones, the third season of Veep, and upcoming new comedy Silicon Valley. While Thrones receives a 15-minute look at its upcoming season, which will be roughly based on the second half of A Storm of Swords, both Veep and Silicon Valley have the first looks at their respective seasons close in at about a minute combined.

Season three of Veep will focus on the presidential campaign of Vice President Selina Meyer, who was inspired to go after her political dreams and end the seemingly endless marginalization she faced while working under POTUS at the end of season two. However, Selina and her team will have to clean up the series of gaffes that haunted them the past few years if she has any hope at catching a spark out on the campaign trail and becoming a buzzed about candidate with a legitimate shot at the White House.

Created by Mike Judge (King of the Hill, Beavis & Butt-Head), Silicon Valley tells the story of Richard (Thomas Middleditch), an introverted computer programmer living in a Hacker Hostel start-up incubator. The show is said to look at the modern-day epicenter of the high-tech gold rush, where the people most qualified to succeed are the least capable of handling success. In addition to Middleditch, the show will star the likes of Kumail Nanjiani (Burning Love), T.J. Miller (The Goodwin Games), and Zach Woods (The Office).

The fourth season of Game of Thrones is set to premiere Sunday, April 6th at 9:00 on HBO, with the third season of Veep following at 10:00 and the series premiere of Silicon Valley closing out the night at 10:30.

Which shows in the HBO spring lineup will you be watching? Are you excited about seeing the rest of A Storm of Swords being played out? Do you think Silicon Valley will fit in well with Game of Thrones and Veep?