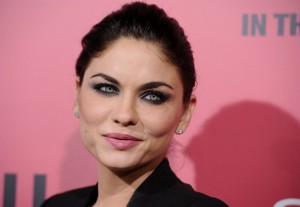 Deadline is reporting that VH1 basketball-themed soap Hit the Floor has added three series regulars ahead of its second season. Joining the cast, which includes the likes of Kimberly Elise and Dean Cain, are Jodi Lyn O’Keefe (Nash Bridges), Adam Senn (The City), and Brent Antonello (One Fine Sunday). O’Keefe will be playing Lionel Davenport, Pete’s estranged ex-wife, while Senn is set to portray Zero, a superstar traded to the Devils whose public image is far from his reality, and Antonello will play ambitious junior sports agent Jude, a young man looking to become the next Oscar Kincade.

The number one new scripted cable series of the summer, Hit the Floor centers on the Los Angeles Devils and their cheerleading squad/dance team, the Devil Girls. The series follows the drama that happens both on and off the court for both teams as the players deal with their exploding fame and weighty expectations, the dancers battle to stand out in an occupation where they feel increasingly replaceable, and the front office does what they have to do to increase revenue and attendance for the team. The series stars Charlotte Ross (NYPD Blue), Taylour Paige (High School Musical 3: Senior Year), Logan Browning (Meet the Browns), Katherine Bailess (One Tree Hill), and Valery Ortiz (Diary of a Single Mom).

In addition to her time on the Chuck Norris-starring CBS series, O’Keefe has appeared on the likes of Prison Break, Two and a Half Men, and Castle, while Senn’s credits include mostly shorts (Losing Sam, Head Spinner) and smaller movies (Video Girl, Magic City Memoirs), similar to newcomer Antontello.

Hit the Floor begins production on its second season January 31st, with the season premiere slated for summer. You can check out a recap of the first season finale here.

Will you be watching Hit the Floor this season? Which new character are you most looking forward to seeing? Who else would you like the show to add for season two?