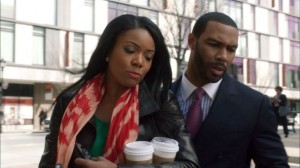 When Mary Jane was a young girl and imagined what it would be like to be proposed to, she thought of rose petals, music, and sincere professions of love from a man who was all hers and always going to be hers. She would then start to cry, barely choke out a yes, and then embrace the man she was going to spend the rest of her life with, the next important journey of her life about to begin. But that’s not how things ultimately turned out, as her proposal came in a hotel room from a married man who hadn’t begun the proceedings to leave his wife, seemingly more of a gesture of his commitment to her than any real intention of getting her down the aisle. But despite the moral and legal complications an engagement with Andre would bring, will Mary Jane say yes?

On the next episode of Being Mary Jane, Mary Jane weighs everything she has to consider when it comes to accepting the proposal from Andre. On one hand, she truly does believe that he loves her, the two have the type of sexual chemistry that she hasn’t had with a man in a long time, and with the sound of her biological clock becoming much more apparent, her loneliness might caught her to seek the type of companionship she needs while she has the chance. However, on the other hand, she’ll always know the true origin of their relationship, she would have to lie to both her friends and her father about her past with Andre, and she couldn’t guarantee that he wouldn’t do the same thing to her that he did to Avery. As much as she might love Andre and want to be with someone in a long-term relationship, would Mary Jane be able to deal with the ghosts of their past lingering long after things with Avery are done?

Elsewhere on Being Mary Jane, Patrick finds himself reflecting on his life after attending a sobriety party.

Do you think Mary Jane will say yes to Andre? Should she? How will Patrick deal with attending a sobriety party?