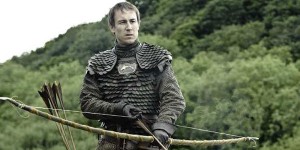 Starz has released a first look trailer for Outlander, its upcoming adaptation of the bestselling Diana Galabdon novel series. A meld of romance, history, science fiction, and action adventure, the series follows Claire Randall (Caitriona Balfe), a married World War II nurse who inadvertently falls through time and lands in 18th century Scotland. Before she’s able to assess where she is or how she could possibly get back to the life she knew, she gets forced into marrying young Scottish warrior Jamie Fraser (Sam Heughan) and soon finds herself falling for him in a way that makes her question herself.

When she first landed in this other life, all she wanted to do was get back to what she knew, but the feelings that she has for Jamie makes that not look like an attractive option anymore. Claire could continue her quest to do what she thinks she’s supposed to do – return home to her husband, her job, her life – but she’s faced with the possibility that maybe that’s not what she should do. Maybe she should stay in this new (old) time and explore her relationship with Jamie. Maybe she should live the life that she never knew she wanted rather than the life she had up until that point.

The 16-episode first season of Outlander is set to premiere this summer on Starz. A concrete premiere date has yet to be announced. You can check out photos from the set here and here, as well as another link to the new trailer here.

Will you be watching Outlander? Does the first trailer look like the series will capture the spirit of the novels? Do you think that Caitriona Balfe and Sam Heughan will make a good Claire and Jaime?