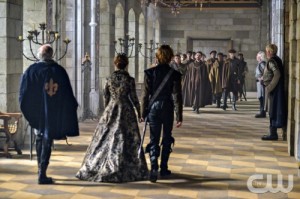 The CW has become the latest network to unveil their midseason schedule and three of the network’s five nights will be undergoing some type of tweak. Mondays will see Hart of Dixie shipped off to Fridays at 9:00 beginning March 21st, while Beauty and the Beast will go on hiatus following its March 10th broadcast; the remaining episodes of its second season will air at a date to be announced. In their place will be midseason series Star-Crossed, starring Aimee Teegarden and Matt Lanter, at 8:00 and The Tomorrow People at 9:00, the latter premiering in its new timeslot on March 17th.

That opens up Wednesdays for the other CW midseason series – The 100, a post-apocalyptic space drama that stars Eliza Taylor, Henry Ian Cusick, and Thomas McDonnell – to air at 9:00 behind Arrow beginning March 19th. Fridays will also see the premiere of the second cycle of Whose Line Is It Anyway? installments beginning March 21st; The CW ordered 24 episodes of the improv series following its surprise success this past summer.

CW midseason premiere dates/moves are listed below. The network will be leaving its Tuesday (The Originals/Supernatural) and Thursday (The Vampire Diaries/Reign) lineups untouched for the remainder of the season.

What do you think about The CW’s midseason schedule? Which series will be cancelled come May? Should the network have used Whose Line Is It Anyway? better?