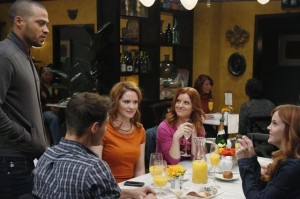 Man on the Moon is the 11th episode of the tenth season of Grey’s Anatomy. So, after all Dr. Bailey has accepted that she has an OCD condition, with the help of Dr. Webber and agrees on working it out with her psychiatrist and not only this, Bailey also agrees on taking medication for her disease. April’s wedding is coming closer so all of her sisters surprise her at the hospital and tell her that they will be throwing her a bridal shower at the Grey Sloan Memorial Hospital. Things get weird and actually good-weird when April takes a stand and confronts her sisters by telling them that she is not their same old, ugly and looser sister anymore and that she doesn’t need this. She goes ahead and dethrones them from being her bridesmaids and declares her new bridesmaids to be Meredith, Christina and Arizona and calls them ‘her people’.

It’s nice to see Jackson and Matthew working out their differences over a patient’s case, for April’s sake as they know that them getting along will make her happy. Isn’t that just the sweetest thing? Moving on with her 3D printer research, Meredith and Edwards successfully complete their first conduit and insert it into a sheep to check. Unfortunately, it doesn’t work out and the poor animal dies. On the other hand Christina and Ross have gotten really close in a short span of time and surprisingly, when they try out their first conduit on their patient, it miraculously works. Hard to digest! This is followed by a discussion between Meredith, Christina and Ross and gradually the conversation leads to an argumentative mode where Meredith questions Yang that why Ross has become so arrogant and nasty. Come on Christina; tell her for God’s sake, she was your best friend. I guess ego can destroy any relationship.

It was not just Miranda Bailey who surrendered to her deteriorating health, Karev also agreed to team up with Jo to help his father through his extractions. During the process, James, Karev’s father admits that all this while, he had known that Alex was his son and he was trying to get clean with him, since that bar incident. Callie and Derek are working on their first research patient and successfully accomplish their aim by realizing the key to the hand movement they were trying to reach to.

That shower for April in the hospital lounge was a crazy scene...had me laughing and cringing at the same time.  But way to go April for firing her crazy sisters as bridesmaids, they took it too far - maybe now she has some hope of an incident-free wedding?

This scene was really needed because with this bit of comic relief this episode would've been a bit bland...Also really liked that they played the song "Team" by Lorde during this scene, that song is so addictive.