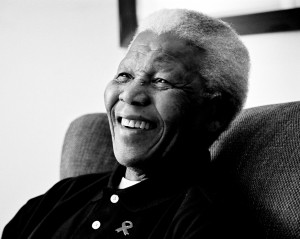 He was the revolutionary the world ever saw, a symbol of peace and justice. Nelson Mandela passed away yesterday at 95. He fought for South African Apartheid and then became the President, the world reminisced the great leader, while the news of his death ruled the headlines of papers, channels and online media across the globe.

Where the Secretary of the United Nations, General Ban Ki Moon paid tribute to Mandela by giving him the title of ‘giant for justice’, on the other hand The Chancellor of Germany, Angela Merkel titled his as the ‘shining example’ and the Indian media compared the South African revolutionary with the symbol of peace, Mahatma Gandhi. The Prime Minister of United Kingdom, David Cameron stated that ‘a great light has gone out’. It was a sad coincidence for Prince William and Kate Middleton, along with the daughters of the greatest freedom fighter, Zindzi and Zenani, as all of them were attending the UK Premiere of the biopic of Nelson Mandela, Mandela: Long Walk to Freedom, by Justin Chadwick. It was mere hours before the premiere that they learnt about the unfortunate news. In fact the film was already getting the buzz of an Oscar Award nomination.

Prince William expressed his grief while exiting from the premiere by saying that this was extremely sad and tragic news and that too, at a time where they were just reminiscing of what a great inspiration Mandela was for the world. Prince Charles also grieved by saying that the world has not just lost a revolutionary, but Mandela’s death has left a void within us and his family which can never be filled. Mandela was a great inspiration for not just South Africa but for the entire world and for the people whose lives got transformed due to his fight for justice, peace and freedom.

South African President Jacob Zuma announced the news of Mandela’s death in a live address on Live Television, which was followed by a reminder to his nation to follow the goals and ideas of ‘Madiba’, as they fondly call him by his traditional Xhosa clan name. He strongly encouraged and enthused his country to abide by what Madiba taught them and stand together as a united nation, as Nelson Mandela always wanted, to make this world a better place to live in.

The Prime Minister of India, Dr. Manmohan Singh referred to Mandela as the Mahatma Gandhi of Africa, comparing his journey of struggle and victory to that of India’s father of the nation. Similarly, the prime ministers of Japan, China and other leaders also paid their respective tribute to the much loved Nelson Mandela.