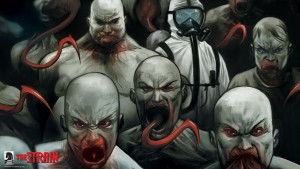 FX has released the first cryptic promo for The Strain, its upcoming vampire horror series from Guillermo del Toro and Chuck Hogan. Set to be showran by Carlton Cuse (Lost, Bates Motel) and based on a trilogy of novels by del Toro, The Strain tells the story of epidemiologist Dr. Ephraim Goodweather (Corey Stoll) and the CDC Canary Team, who are called in to investigate a plane that arrives at JFK with its lights off and doors sealed. Inside? 200 corpses and four survivors. As bodies begin to disappear from the morgue, they discover that what’s about to hit their city is bigger than any of them could have imagined. While the promo doesn’t exactly show anything directly tied to the premise, it does establish the type of hysteria that will hit The Strain once the Canary Team shares their discoveries, which lead them to believe they’ve stumbled upon an ancient strand of vampirism.

In addition to Stoll, The Strain stars the likes of David Bradley (Harry Potter and the Prisoner of Azkaban) as Professor Abraham Setrakian, a Holocaust survivor turned pawn shop owner; Kevin Durand (X-Men Origins: Wolverine) as Ukrainian rat exterminator Vasilly Fet, who joins the war against the vampires; Mia Maestro (Frida) as biochemist-turned-fierce-warrior Dr. Nora Martinez; Sean Astin (The Lord of the Rings: The Two Towers) as Jim Kelly, a CDC administrator who works closely with Goodweather and Martinez; and Jonathan Hyde (Titanic) as Eldritch Palmer, a billionaire looking to become immortal by any means necessary.

The Strain is set to premiere July 2014 on FX. The series is said to be on track to run anywhere from 3-5 seasons, provided that ratings hold up enough for at least two renewals.

Will you be watching The Strain? Does the first promo for the show intrigue you at all? How would you like the advertising campaign for The Strain to look?