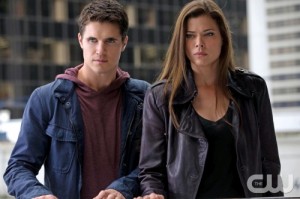 Stephen has brought a sense of hope to the Tomorrow People that they were previously lacking under John’s leadership. Not only has their newest member implanted in their minds the idea of living above ground, although that won’t be possible until Ultra is taken care of, he’s shown that he’s willing to work with any new break-outs that pop up, as he’s still trying to sort out what this new phase of his life means, as well. He’s still in their shoes, no matter how long he’s been involved with the Tomorrow People, and knows how they’re feeling, so Stephen is the group’s best ambassador at the moment, someone who can make even the roughest of break-outs at ease with the transitional period in their life. But has he gotten too eager to help with the break-outs?

On tonight’s episode of The Tomorrow People, with John escorting Russell to Oregon once the latter learns of his father’s death, Cara is in charge and forced to deal with a new break-out, a pool hustler who has gotten herself on Ultra’s radar. Though it’s only a matter of time before they pick her up and wipe her powers, Cara’s hesitant at the possibility of riding in and trying to help her, understandable following the ambush that left three of their own dead and several others critically injured. She knows that a failed rescue mission, regardless of the abilities of the break-out and the possibility of their powers being lost, would cause John to go off the deep end, maybe even pushing him out of the community and into a life on his own; however, even knowing how opposed to an attempt to retrieve the break-out John would be, will Cara listen to Stephen and exercise her leadership abilities by ordering an extraction?

Elsewhere on The Tomorrow People, Jedikiah has a secret that could destroy his career.

Do you think that Stephen and Cara will be able to help the latest break-out? What could Jedikiah’s potentially game-changing secret be? With John out of town, how will Cara handle being in charge of the rest of the Tomorrow People?