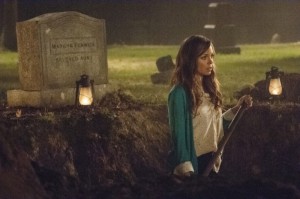 Ingrid opens up the breakfront and finds, located behind the false back, a trunk, which she puts on a nearby table. She’s not sure how to open it and after trying “abracadabra” and clapping three times, manages to unlock it by saying the word “open.” Inside are candles, photos, papers, and a spell book; she opens the latter and rifles through it until she finds a resurrection spell that she uses to bring Wendy back to life. While Wendy is upset at coming back to life, seeing as how she would have done so in a few hours anyway and Ingrid doing the spell means someone she loves will have to die to restore universal balance, she asks about Joanna and learns that Freya is still trapped in the photo.

While inside the photo, no one can hear Freya, who is trying to avoid her captor Doug and the knife she presumes is meant for her. After opening a door to find a (literal) brick wall and subsequently being caught, Freya tries to chant her way out of the photo, which doesn’t work and only makes Doug more upset. He tells her that he’s a former lover who wanted to marry her until he found out what a vindictive little witch she was. The knife that he has with him? Not meant for killing her; it’s for escaping the photo once he ties her up with the curtain rope and lights the bar on fire. He doesn’t want to immediately kill Freya – he wants her to burn and suffocate while feeling the pain that she had caused him all those lifetimes ago. And then he wants her to die. He leaves her with a kiss, which she interrupts by biting his lower lip until the blood comes.

Joanna has been taken in for questioning by Adam and learns that calm, lucid Maura correctly described the scene of the crime – the shifter’s angry, agitated demeanor; the attack in cold blood; the wounds that Bill suffered. Though she denies knowing of the symbol that the figure drew in the ground, Joanna asks for a cigarette and uses the flame to do a spell to check on Freya, who she learns is still alive. Back at the bar, Dash runs into Killian after five years apart and the brothers play a quick game of pool, which Dash wins. However, Killian won’t answer his question about what he wants in town and leaves his brother to inquire to one of the employees about where Freya is. Meanwhile, on the ride to the bar to save Freya, Wendy quickly tries to explain to Ingrid who the man that took her sister was and that the girls have lived and dead at least 12 times due to a curse on their heads. All the women in their family have some type of curse, though their really bad luck with men is blamed on stupidity rather than magic.

Harrison, Joanna’s immortal attorney, arrives at the jail and eventually gets her out on $1,000,000 bail. He used his connections and called in favors with some shady clients to get her freedom restored, something she’s annoyed at due to her innocence, while Freya frees herself from the picture by undoing the ropes, hitting Doug over the head with a statue, and using his knife to burst through the wall. The bar restroom is filled with smoke due to the picture having caught on fire and she gets saved by Dash, who lays her on a pool table and kisses her back to consciousness. Freya explains that the last thing she remembers is playing darts with Killian and going to the bathroom, though she mentions a dream where she was in a speakeasy and a man tried to kill her. Ingrid and Wendy make it to the bar and the latter turns back into a cat due to adverse effects of the resurrection spell. Luckily, Ingrid remembers the chant to free Freya from the photo, only for her sister to come in to the bathroom and surprise her. As the two take the cat and leave, Doug’s hand reaches through the photo, since Ingrid did enough chanting to free him.

Joanna gives Harrison a number to call to reach Ingrid and a message, which indicates that her bail is set at $100,000 and that the money lies with Aunt Marilyn. After Wendy transforms back into her human form and attempts to fill Freya in on the gory details of the curse, the shapeshifter, and what her abilities actually are, they go to the cemetery; there actually is no Marilyn. Marilyn is someone Joanna made up as a way to hide her money in plain sight, with the coffin full of money for the girls. The trio manages to crowbar open the coffin and celebrates by tossing the seemingly bottomless pile of money into the air while the shifter watches from a nearby pool of water. Meanwhile, Dash tries to buy Killian’s exit from town, which doesn’t end up working, and Doug kills an innocent woman before stealing her car in hopes of tracking down Freya and finishing her off.

Back at the Beauchamp home, Ingrid frets about being more powerful than she knows and the potential consequences of the resurrection spell, while Freya gets upset when Joanna tries to keep her quiet of hew newly discovered abilities. She’s angry that her mother made her feel like there was something wrong with her when she was younger and questioned if she was a witch and even when Joanna argues that she wanted her girls to have a normal life for once, Freya leaves the house. As she doesn’t want the problem to be fixed right now, opting to wallow in her pain, she heads to Killian’s boat and the two have a brief conversation before laying on the deck and looking up at the stars. She won’t even entertain his question about whether or not they could ever be friends due to the sexual tension that exists between them, but she does have to leave when Joanna calls her about the photo at the bar and the possibility that Doug escaped like he escaped from the painting.

Unfortunately, Freya didn’t answer her phone and only saw that Joanna called, so she simply went home, where all the lights are out and the ceiling is leaking. The cause? The tub running over. She goes upstairs and gets jumped by Doug, who forces her into the tub and uses a candle to freeze her under the water. Joanna comes home quickly enough to get him away from her and break the spell, with Wendy doing a chant to trap him in a painting found in the hallway. The four Beauchamp women bury the painting the following morning, as burning it would kill him and they don’t do that (anymore); while Freya is still angry at her mother, she accepts a hug and sees Dash waiting with coffee on the front stoop. He offers to get Joanna an attorney, which is already taken care of, and goes inside with them, where he lays with Freya in bed and asks what’s been bugging her. After she asks if he would love her if she were a mess, he says he loves her because she’s a mess and that he’s not going anymore anytime soon. Seeing that he runs towards problems in hopes of fixing them vs. running away like Killian admitted to doing, she kisses him.

While Ingrid finds the resurrection spell in the spell book, Joanna does a tarot reading that continues giving her the same result that she’s been getting. Scared of losing her girls again, she gets reassurance from Wendy that she won’t have to fight this latest threat alone. Elsewhere, the shifter pricks its finger and uses the blood to draw its symbol on the tree outside the Beauchamp’s home, causing it to die and the leaves to fall.

Additional thoughts and observations:
-“Go to hell.” “Already been. Now it’s your turn.”
-“Can I do that?” “No.” “Can I fly?” “No.”
-“The first rule of witch club – don’t talk about witch club.”
-So, hey, everybody, and welcome to TVHackr’s coverage of Witches of East End. I wasn’t sure about writing about the show, but between the good numbers other articles have done and how much I liked the pilot, I figured I’d give this a shot. While I haven’t read the book this is based on, I’ve seen a lot of witch-themed shows, so this should be fun.
-I kind of got the feeling that Dash is something supernatural from his confrontation with Killian at the boat and how perfect of a person he seems to be. Maybe another ex-lover of Freya’s, only this one is playing the long con? Or could he be the shifter?
-No Barbie, no Andrew from Buffy. I kind of think Barbie’s baby will be the sacrifice to restore the universe’s balance after the resurrection spell was used, since Ingrid was the one who helped bring it to life.
-How great does Madchen Amick look? The fountain of youth is real, y’all.
-Would Wendy have another reason for not wanting Joanna to know that she was resurrected? I get that she wants to keep their relationship alive after 100 years of silence and that she doesn’t want her to be mad at Ingrid, but could there be something else to it?
-Cool effect in the picture burning in the bar as the fire raged on inside.
-Thus far, the show definitely knows how to punctuate a scene and send you into commercial break: Doug’s hand reaching through the photo, the shifter watching from the pond, the bar being lit on fire, Doug drowning Freya, and the tree dying from the shifter’s blood.
-This felt a lot like the second half of the pilot. I mean, it’s the second episode, so duh, but nothing new really popped up. The thing with Doug was finished and there was a lot of exposition explaining what/who they are, which was necessary considering this was when Freya found out about her identity but still made it half a step down from the first episode. Now that we all know who we are and everything’s out on the table, I’m curious how the show will proceed from here.
-Next week on Witches of East End: Ingrid struggles with the consequences of the resurrection spell, while Wendy tries to teach the girls how to use their powers and Joanna begins investigating who could be the one framing her for murder.