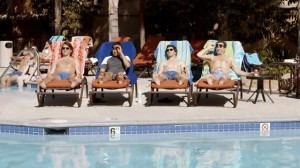 CBS has made the first episode of upcoming comedy We Are Men available on CBS.com, the CBS app, and select CBS network partner sites. The series stars Chris Smith (Mayne Street) as Carter, a man who gets ditched at the altar and moves into a short-term apartment complex where he befriends three men: four-time divorcee and self-described ladies’ man Frank (Tony Shalhoub), a clothing manufacturer; Gil (Kal Penn), who moved into the complex after being caught having an affair; and Stuart (Jerry O’Connell), an OB/GYN awaiting the finalization of his second divorce.

The series is the sixth pilot of the season to be given an early release and the first on CBS, following Trophy Wife, Back in the Game, The Goldbergs, Ironside, and Welcome to the Family. It’s one of four comedies that the network will be premiering this fall, along with The Crazy Ones, Mom, and The Millers, yet won’t be premiering along with the rest of the Monday night comedy lineup; since the final season premiere of How I Met Your Mother will be one-hour, We Are Men will be premiering the following week. Though releasing a pilot early is meant to increase sampling and spread word-of-mouth, it often results in lower live ratings and lowers the ceiling on what a show can achieve, so We Are Men will have the pressure of that, several CBS comedies waiting in the wings, and a second-week comedown for How I Met Your Mother to contend with when it makes its series premiere later this month. Will it be able to breakthrough despite the obstacles before it?

In addition to the four main cast members, We Are Men will also star Rebecca Breeds (Home and Away) as Frank’s daughter Jill, who he describes as the one positive thing that came from his series of failed marriages.

The series premiere of We Are Men is set to air Monday, September 30th at 8:30 on CBS. You can check out the rest of the CBS fall premiere dates here.

Will you be watching We Are Men? Do you think that CBS should have released the pilot early? Which pilot would you like to see released early next?