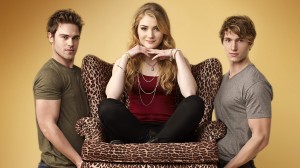 ABC Family and Alloy Entertainment have announced that they will be releasing the script for the scrapped Nine Lives of Chloe King wrap-up movie on Friday, September 13th at 9:13 a.m. Subtitled Salvation, the movie will reportedly answer fan questions about The Order, Whitley’s motivations, Alek’s past, whether Chloe can keep her identity secret from her mother, and who Chloe wants to be with – Brian or Alek.

“Although we ultimately decided not to continue with the series, we wanted to make the Chloe King movie script available to her amazing fans to provide them the closure they’ve been clamoring for,” said Kate Juergens, Executive Vice President, Original Programming and Development and Chief Creative Officer, ABC Family.

Starring Skyler Samuels (The Gates), The Nine Lives of Chloe King debuted in the summer of 2011 and told the story of Chloe King, a seemingly normal teenage girl who finds out that she’s descended from an ancient race called the Mai, who believe she is their savior. In addition to having nine lives, one of which was lost in what turned out to be the series finale, Chloe gained enhanced speed, strength, hearing, agility, and night vision with her discovery, in addition to the responsibility of knowing that she alone would be tasked with protecting the Mai from human assassins.

In addition to Samuels, The Nine Lives of Chloe King, which lasted 10 episodes, starred Benjamin Stone (Harry Potter and the Chamber of Secrets), Amy Pietz (Caroline in the City), Grace Phipps (Fright Night), Ki Hong Lee (MotherLover), Alyssa Diaz (Red Dawn), and Grey Damon (Friday Night Lights). You can check out a promo for the series below.

What do you think will happen in The Nine Lives of Chloe King: Salvation? Were you disappointed when the show didn’t get a back order and ended on a major cliffhanger? Should more networks offer stuff like this in order to maintain a good relationship with fans?