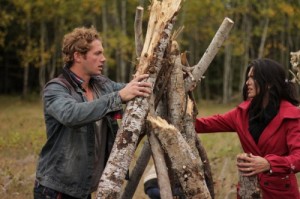 Though there were rumblings about something not being right from the beginning of Siberia, it didn’t hit home just how alone the contestants were or how different this show was from a typical reality show until the abandoned producer basecamp was discovered. Until then, this just seemed like a show with extra producer manipulation to the remaining contestants, with the talk of the tiger, the speakers in the trees, and the revelation that Joyce was a plant from the producers, but now, the sinking realization that they might actually be trapped in the Siberian wilderness without food, technology, or transportation has set in. So what do they do now that the possibility of a medical team flying in or a meeting with the producers has been taken off the table?

On the next episode of Siberia, the Revealer gives the contestants their first item in several episodes: a single gas mask. Since they don’t know if the producers actually fled the country or are using the deserted camp scene as another psychological mind game, the thought is that they’re about to be gassed as some sort of sick twist in the game that is starting to wear on all of them emotionally. What’s curious about the Revealer become active following the producer abandonment, aside from the timing itself, is that somebody had to load the mask into the box for it to drop down to the contestants; either the producers loaded it within the last couple of days and left before they could see the contestants’ reactions to the latest potential twist or someone else has taken over the game, someone who wants to ratchet up the pressure impacting the contestants and someone willing to turn the game fatal – all for the sake of entertainment.

Elsewhere on Siberia, Esther becomes the object of a brutal verbal attack once Johnny, Joyce, and Daniel return to camp, while Sam finds the book that Miljan’s been carrying around and a mysterious radio tower beacon appears in the distance. Is this the saving grace for the contestants?

Do you think that the producers are planning to gas the contestants? Why would they have abandoned the basecamp in such a hurry? What do you expect to learn from Miljan’s book?