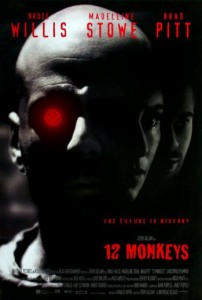 According to , Syfy is nearing a series order for a scripted adaptation of 1995 Bruce Willis drama 12 Monkeys. The movie, which co-starred Madeleine Stowe and Brad Pitt, tells the story of a post-apocalyptic world ravaged by a deadly virus and the criminal who volunteers to time travel in order to retrieve information on where said virus originated. Reportedly, the 90-minute backdoor pilot, which would be followed by a series order, will be penned by Terry Matalas (Star Trek: Enterprise) and Travis Fickett (Nikita).

The network is said to be eyeing the launch of five to six original scripted projects, all with orders of 8-10 episodes rather than a typical 13, and one four-hour miniseries for 2014. Their next series, thriller Helix, premieres in January.

Elsewhere in the world of genre television, BBC has announced that they”ll be co-producing a fantasy drama called Atlantis with the intent of airing it during their Supernatural Saturdays programming block this fall. From Howard Overman (Misfits), Julian Murphy (Merlin), and Johnny Capps (Merlin), the series is said to reimagine Greek myths and legends in a story where young Jason arrives to the famed city, home of bull leaping, snake haired goddesses, and giant palaces. The cast is set to include Mark Addy (Game of Thrones), Jemima Rooper (One Man), Juliet  Stevenson (The Hour), Sarah Parish (Hatfields & McCoys), and Jack Donnelly (Dancing On The Edge).

BBC America had success earlier this year in the genre game with Orphan Black, which earned its star Tatiana Maslany a Critics” Choice Award and a second season, set to debut in April 2014. The series was released on DVD and Blu-ray earlier this month.

Do you think that 12 Monkeys should be adapted into an on-going series? Will you be watching Atlantis this fall? What other types of topics would you like to see covered in sci-fi/horror television?