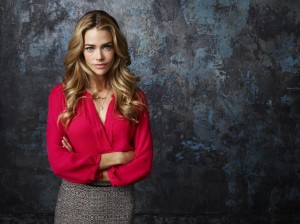 In order to maintain his innocence and keep Kyle off his back, Danny has to be that much more careful in covering his tracks and making sure that there’s nothing he can be brought in on. The entire town would like nothing more than to see “Socio” off the streets for good and Kyle is at a point of desperation where he’s looking for any possible sliver of evidence to use against Danny; one false move and Danny could end up out of Green Grove and behind bars for the rest of his life. While he’s done a fine job at avoiding detection and keeping himself free, coming up on Twisted, Danny will be forced to face the fact that the worst enemy to his case might be living in the same house.

Tuesday, July 23rd – “We Need to Talk About Danny”
When Phoebe’s brother Tyler (played by Chris Zylka) holds a party at the cemetery, Jo and Lacey press Danny to reveal the secrets he’s been keeping and  end up spilling one of their own. Danny suffers the consequences of a mishap on the soccer team and Lacey defends Danny against Archie’s increasingly vicious verbal attacks. Meanwhile, Rico confronts Jo about her obsession with Danny’s case. Karen fails at a job interview, and Kyle seizes an opportunity to win her trust.

Tuesday, July 30th – “Docu-Trauma”
Danny finds himself besieged by a group of masked pranksters and feels increasingly alone as the town of Green Grove continues to vilify him. Tyler asks to interview Danny for his new documentary about the town’s reaction to  Danny’s return. In an effort to fit in, Danny decides to throw a party with Tyler’s help, in exchange for the interview, but things do not go smoothly. Meanwhile, Jo goes on a date with Tyler, while Rico struggles with his feelings for his best friend. Kyle steps up the pressure on Karen to causing her to make a stunning revelation.

Tuesday, August 6th – “The Truth Will Out”
When a major development in the murder investigation threatens to send Danny away from Green Grove for good, Danny and Kyle find a reason to work together, and Jo and Lacey contemplate whether to reveal a major piece of evidence. Lacey’s aloof and disapproving father, Samuel (Allan Louis), arrives in town for Lacey’s sister’s birthday party hiding a major secret. Meanwhile, Danny is keeping his own secret from his best friends and realizes it may be time to come clean. And Rico is alerted to a shocking video that has the potential to destroy friendships and reputations.

Will Kyle win Karen’s trust after the botched job interview? What will be on the video that Rico finds out about? How will Lacey react to having her father around for her birthday?