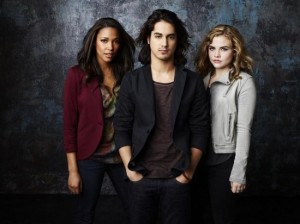 When Danny decided to not dispose of the necklace the night he destroyed the photos of Tara, it was bound to pop back up and provide fuel for Chief Masterson’s investigation. But its significance is still up for debate; just where did Regina get the necklace in the first place? How did Danny attain it the night of her murder? Does the fact that he chose not to rid himself of the necklace mean something? Either Danny has such a strong emotional tie to the jewelry that prevented him from being able to destroy it or he has enough confidence in his innocence that he thinks that even a damning piece of evidence like that wouldn’t get him convicted. Coming up on Twisted, the necklace is brought into play, thanks to Kyle finding the photo of Tara and obtaining a warrant, but is this the beginning of Danny’s march toward imprisonment?

Tuesday, July 2nd – “Sleeping with the Frenemy”
Lacey’s mom Judy (played by Robin Givens) invites Jo to a sleepover, much to Lacey’s dismay. Despite the promise of an incredibly awkward evening, Jo seizes the opportunity to get closer to Regina’s friends and uncover potential evidence that points to another suspect in her murder. Tess persuades Karen to reconnect with her old friends, only to have it end in humiliation when Regina’s mother Gloria (played by Jessica Tuck) viciously confronts Karen about Danny. Meanwhile, Danny has his first soccer match and struggles to stay on civil terms with Archie and his teammates, and Kyle steps up his investigation.

Tuesday, July 9th – “The Fast and the Furious”
As Green Grove prepares for the annual Fall Festival, the town residents are at odds over whether Danny should be allowed at the Festival. When Danny shows up, tensions escalate into a riot, which Kyle has to quell. Green Grove’s Mayor Rollins (played by Christopher Cousins) chastises Kyle about the lagging case and Jo’s increasing involvement with Danny. Father and daughter find it increasingly difficult to see eye to eye when Jo questions the significance of the necklace in the murder investigation. Lacey also wonders about the necklace and approaches Regina’s mother, Gloria, for information. Meanwhile, Jo and Rico’s friendship is strained as Jo spends more and more time with Danny.

Will Lacey and Jo begin repairing their friendship at the sleepover? Did Tess knowingly set Karen up to be ambushed by Gloria? Is the necklace going to be the thing to break the case open or will it end up having little to no significance?