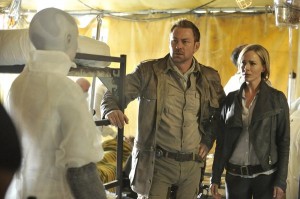 Founded on instability, violence, and fear, a town like Defiance is bound to be filled with secrets, both on-going and long thought dead. Many things have gone either unspoken in the Midwestern boom-town or, at the very least, spoken only to those who need to know and thus, there’s been tension building throughout the first season of Defiance. However, as much mystery and intrigue as there is behind Quentin’s search for the truth about his mother, Doc Yewll’s recently unveiled connection to Nicky, and the ever-complicating mayoral race, something unexpected will hit Nolan and the residents of Defiance hard enough to where some secrets might just become public knowledge.

On the next episode of Defiance, Nolan and Tommy find the body of a businessman in the walls of the NeedWant: Hunter Bell, Kenya’s former husband. However, Datak is the one who ends up arrested for the murder, throwing a major wrench in the impending nuptials between Alak and Christie. After going on a quest to find out who was responsible for levying the allegations against him, Datak seems to think that it was Rafe’s doing and the uneasy peace the two had gets destroyed in the process. Datak needs to be careful because not only is he putting himself and his family in danger by testing Rafe, he’s throwing away the opportunity to run the mines and expand his reach in Defiance. Granted, with the election looming, he might be adding more capital to his already impressive empire, but combining the mines with the political title could really give him a stranglehold on the town.

Do you think that Datak killed Hunter Bell or is someone else in Defiance using the NeedWant to divert attention from themselves? Could Kenya have played a part in the death of her husband and hid him in the walls of her establishment? Will Alak and Christie end up married at the end of the episode?