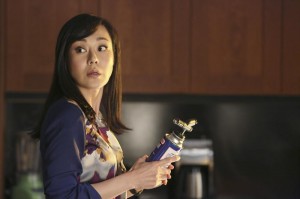 Karen seems to have come to terms with what continues to pull her into the Grey orbit. The loss of Tom left her scrambling for any kind of connection to him that she could find and she ended up settling on Sam; being that she was Tom’s mistress, she doesn’t have anything tangible to hang on to and lessen her grief, so it’s the memories and the presence of his son that keep him close to her. Her guilt over prescribing the morphine that ultimately killed him has also added a sense of duty to the equation, as she thinks that the pain that the Greys are in is due to her and her alone and that means she should do her best to leave them in as good of a shape as she can.

On the next episode of Mistresses, though, Karen continues to defy what her mind is telling her and sticks by Sam Grey, even with Savi’s advice still fresh in her memory. But she’s not alone in clinging to the boy; he’s just as attached to her as she is to him, only his attachment is more transference/avoidance-related than anything based on real feeling or emotion. Sam just lost his father and he’s desperate to have something or someone to lean on, especially someone as good of a listener and emotionally supportive as Karen. He’s confusing a physical attraction with a romantic connection, using her as both a way to avoid thinking about the sadness in his heart from Tom’s death and an object to project the love he had for his father on. Karen’s made clear that she’s not yet done with Tom and the Grey family, but how long can she hang on with an investigation looming?

Elsewhere on Mistresses, Savi doesn’t know whether Dom or Harry is the father of her child and looks into prenatal paternity tests, while Joss continues to befriend Alex and Miranda tries to squeeze some money out of April.

Who do you think is the father of Savi’s baby? Why has Sam taken such a liking to Karen? How long will it be until Alex and Joss hook up?