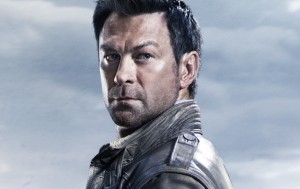 As was mentioned previously on Defiance, the reason the citizens of the boom-town are still so fragmented is due to the desire to preserve customs from their home planets. With the Votan invasion happening decades ago, the amount of Defiance residents who have firsthand knowledge of the way life was before the Earth becoming terraformed is growing smaller each day; to keep that information alive, each alien race, as well as what humans remain, has embraced their identities that much more and with that, the mores and unique traditions that make them who they are. But what happens when Defiance is confronted by someone who knew how things were back in 2013?

On the next episode of Defiance, Nolan and Tommy discover an American astronaut who had been in hypersleep for decades. The man is both a potential boon of knowledge and danger to the citizens of Defiance, as he’s one of the few with experience in a pre-Votan world yet an unknown enough variable to where he might not take to the way the world is now. It’s a lot to have to take in, that you’ve been asleep for decades and nearly everything and everybody you know and love is gone, and there’s no guarantees he reacts to the immense changes in a way that permits him to stay in Defiance. However, should he come to peace with what’s transpired since he was last conscious, he could become quit a resource for Defiance and someone who contributes a lot to the year 2046.

Will the astronaut bring the citizens of Defiance any type of knowledge or understanding about the way the world once was? Is he going to be able to survive on a planet that looks drastically different than what he’s used to? How will his discovery impact the rest of the town and the way they view their current way of life?