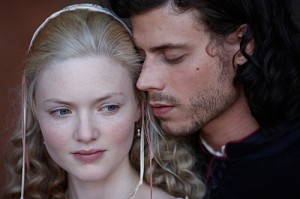 Deadline is reporting that the current season of Showtime’s The Borgias will be its last. Though ratings are on par with season two, including the fact that the most recent episode was its highest rated of season three, it came down to how conclusive the third season will prove to be and that creator Neil Jordan didn’t feel as if he had enough material to create another 10 episodes. A two-hour movie was bandied about as a way to close the story of the infamous Italian crime family, but Jordan claims that it would have felt too disconnected from the series and there was a chance it could have come out anti-climactic.

The Borgias was intended to go for a four-season run like its predecessor The Tudors, so Jordan won’t be able to actualize the ending he intended to leave the series, which was reportedly to leave Pope Alexander unable to repent for his sins, as no one would be willing to hear his confession, and ending up in hell after dying. The series will have its ninth episode of the season (and penultimate overall) on Sunday, which will see Lucrezia freeing herself from Naples, Alfonso becoming suspicious of his wife, and Alexander collaborating on a plan with Mattai that will deny anyone else the ability to manufacture gun powder.

The natural successor to The Borgias seems to be The Vatican, starring Emmy winner Kyle Chandler and Pushing Daisies‘ Anna Friel. Though it hasn’t been picked up to series as of yet, the show has star power (including pilot director Ridley Scott) and could easily slide into the spring premiere window that The Borgias has occupied for three seasons, thanks to topical similarities. However, Showtime has shown that they’re not afraid to move their shows around (e.g. Dexter moving to summer for its final season after being a fall cornerstone for years), so there’s a chance that The Vatican could be used elsewhere and one of the network’s established players could find itself in April next year.

The series finale of The Borgias airs Sunday, June 16th at 10:00 on Showtime.

Do you think that the show could have ran for another season? How do you feel about the (extremely) short notice of the decision? Will we see The Vatican make its debut next season as a result of The Borgias going off the air?