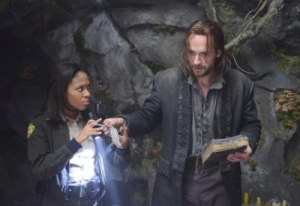 FOX has released trailers for several of its new shows, including robo-drama Almost Human, romantic comedy Us & Them, and Dads, executive produced by Seth MacFarlane. Gang Related, Murder Police, and Surviving Jack, not presented below, will all have their trailers released later this evening.

Which trailer looks the most promising? Which looks the most disappointing, considering your expectations going in? Do you think that FOX has stronger new dramas or comedies for next season?

Almost Human
Who’s in it: Karl Urban, Lili Taylor, Michael Ealy, Minka Kelly, and Mackenzie Crook
What’s it about: Set in the near future, when all LAPD officers are partnered with highly evolved human-like androids

Dads
Who’s in it: Seth Green, Vanessa Lachey, Brenda Song, Giovanni Ribisi, and Martin Mull
What’s it about: Two successful video game developers who have their lives turned upside down when their nightmare dads unexpectedly move in with them

Gang Related
Who’s in it: Jay Hernandez, RZA, Terry O’Quinn, Inbar Lavi, and Cliff Curtis
What’s it about: A gang member sent in to infiltrate the San Francisco Police Department only to be caught between his crime family ties and an increasing sense of loyalty to his new brothers in blue

Sleepy Hollow
Who’s in it: Nicole Beharie, Orlando Jones, Tom Mison, Katia Winter, and John Cho
What’s it about: Modern-day take on “The Legend of Sleepy Hollow” which follows Ichabod Crane as he partners with Sleepy Hollow’s local female sheriff to solve the mysteries of a town ravaged by the battle between good and evil

Surviving Jack
Who’s in it: Christopher Meloni, Claudia Lee, Kevin Hernandez, Tyler Foden, and Connor Buckley
What’s it about: The story of a boy becoming a man, and a man becoming a father, in a time before coming of age was something you could Google

Us & Them
Who’s in it: Alexis Bledel, Jason Ritter, Kurt Fuller, Jane Kaczmerak, and Kerri Keeney-Silver
What’s it about: Based on the U.K. series “Gavin & Stacey” about new lovers who try to maintain their relationship while combining their polarizing families’ lives