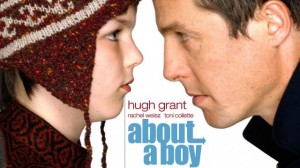 Yesterday, NBC informed the pilots that were out of contention for a schedule space of their status, also cancelling low-rated mystery Deception. Today, they officially started ordering new shows for next season, beginning with two new dramas and a comedy adaptation of a Hugh Grant movie.

Believe becomes J.J. Abrams’ second pickup for next season, joining FOX’s robo-cop drama Almost Human. The show follows a girl in possession of a great gift/powers – which will come into their own in seven years – and the man who is sprung from prison to protect her from those trying to hunt her down. Among those starring are Delroy Lindo, Jamie Chung, and Kyle MacLachlan. From Rand Ravich, Crisis is a Washington, D.C.-set drama about an idealistic secret service agent who finds himself at the epicenter of an international crisis on his first day on the job. The show stars the likes of Dermot Mulroney, Lance Gross, Gillian Anderson, and Rachael Taylor.

On the comedy side, NBC’s first pickup is About a Boy, executive produced and adapted by Parenthood’s Jason Katims. The show, based on Nick Hornby’s book-turned-film of the same name, tells the story of the relationship between a bachelor man-child and the young boy who moves in next-door with his kooky single mother. The show features David Walton, Minnie Driver, Al Madrigal, and Anjelah N. Johnson. It has also given the greenlight to Sean Saves the World, a multi-camera comedy from Will & Grace‘s Sean Hayes, who stars as a father who must figure out how to become a full-time dad to his teenage daughter as well as navigate his temperamental new boss at work.

Finally, the network has picked up The Family Guide from D.J. Nash. In the comedy, starring Parker Posey and JK Simmons, a 14-year-old boy who watches his family come closer together post-divorce.

Are you looking forward to these new shows? Do you think that any of them will breakthrough for NBC? What type of shows should NBC be looking to pick up for the 2013-2014 season?