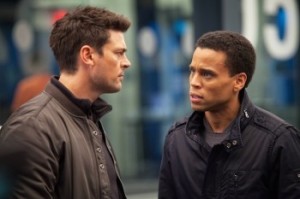 FOX has officially picked up its slate of new dramas for next season, which totals four total series, all of whom have a mixture of procedural and serialized elements in their storytelling. Additionally, the focus is on action/sci-fi programming, centered on male leading characters, which seems to indicate that the network is searching for something to pair with The Following for when Bones goes off the air.

From J.J. Abrams, Almost Human is an action-heavy police drama set 35 years in the future, when police officers are partnered with highly evolved human-like androids. A cop with an aversion to robots slowly comes around to his partner and the two team up to solve crimes. The show stars Karl Urban, Lili Taylor, Michael Ealy, Minka Kelly, and Mackenzie Crook.

Gang Related follows a gang member sent in to infiltrate the San Francisco Police Department, only to be caught between his crime family ties and an increasing sense of loyalty to his new brothers in blue. It stars Jay Hernandez, RZA, Terry O’Quinn, Inbar Lavi, and Cliff Curtis.

Based on the hit Australian series of the same name, Rake stars Greg Kinnear as a brilliant and frustratingly charming criminal defense attorney. The show also features Miranda Otto, Necar Zadegan, Tara Summers, and David Harbour. Finally, Sleepy Hollow is a modern day take on “The Legend of Sleepy Hollow”, which follows Ichabod Crane as he partners with Sleepy Hollow’s local female sheriff to solve the mysteries of a town ravaged by the battle between good and evil. Among those

Among the drama pilots not receiving a pickup are Boomerang, about a family of assassins; Delirium, based on the sci-fi book trilogy; The List, which centered on an Inspector with the U.S. Marshal Service who’s tasked with finding the person who stole a file with the secret identities of every member of the Witness Security Program; and The Wild Blue, from Justified executive producer Graham Yost.

FOX is set to reveal its 2013-2014 schedule on Monday, May 13th. You can check out the comedies currently in contention here.

Do you think that the network made the right decisions in its greenlights? If not, which of the busted pilots do you think should have made it instead? How do you think each of the four will do next season?