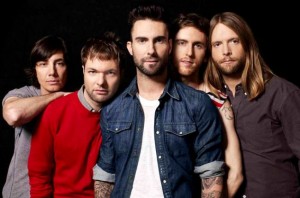 Grammy-winning group Maroon 5 (fronted by Voice judge Adam Levine) is set to debut the fourth single from their fourth studio album May 20th on The Voice, as well as offer a sneak peek of the accompanying video. Following the success of “Payphone”, “One More Night”, and “Daylight”, “Love Somebody” looks to continue the success of Overexposed, which was certified platinum this past January. You can check out the song below:

-Sherri Shepherd has been tapped to host the second season of NickMom Night Out, the stand-up comedy series on NickMom. Taped in front of a live studio audience and taking moms out for a night at the comedy club from the comfort of their couches at home, previous hosts of Night Out include Tisha Campbell-Martin, Caroline Rhea, Judy Gold, and Bonnie McFarlane. The fledgling network also renewed talk show Parental Discretion with Stefanie Wilder-Taylor for a second season.

-ABC Family has announced a Pretty Little Liars recap special to air Tuesday, June 4th at 8:00. Pretty Little Liars: A LiArs Guide to Rosewood encompasses all three previous seasons of the twisty mystery and will recap the Liars’ history with “A” from the very first text message to the most recent spotting of Red Coat. The fourth season of the show premieres the following week.

-On Sunday, May 12th at 9:00, E! will be airing Holly Has a Baby, a one-hour special that follows former Playmate Holly Madison and boyfriend Pasquale Rotella as they prepare for the arrival of their baby, move into a new home, and eventually welcome daughter Rainbow into the world.

-HBO is set to air Life’s Too Short Special on Friday, July 5th. The special is meant to wrap up the journey of actor Warwick Davis, a little person trying to hustle his way back into the spotlight. The seven-episode season of the Ricky Gervais creation began airing in February 2012.

–Cops has moved to Spike TV and will begin airing episodes there this September. The show, which recently ended its 25th season, was a major building block for FOX in its early days and continued to put up respectable business on Saturdays for years. The move follows fellow former Saturday staple America’s Most Wanted in hopping networks, though that show didn’t last long in its new home at Lifetime. Spike TV is said to be keeping Cops on Saturday nights at 8:00 for its upcoming 26th season.

-“Storm Front”, the next installment in the Derrick Storm eBook trilogy, will be released Tuesday, May 21st. In the thriller, Derrick Storm taking on his old nemesis who is trying to destroy the global economy and unleash untold worldwide chaos.