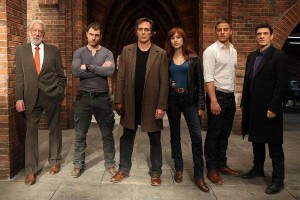 After unveiling a slew of summer premiere dates recently, NBC has added to three additional series to its schedule, pairing two of them together and having the lone new scripted entry stand on its own.

The network will debut original scripted drama Crossing Lines on Sunday, June 23rd at 9:00 with a two-hour premiere before moving it to 10:00 for the rest of its 10-episode run. From creator Edward Bernero, Crossing Lines taps into the charter of the International Criminal Court to investigate serialized cross-border crimes and to hunt down global criminals. The series stars William Fichtner, Donald Sutherland, Marc Lavoine, Gabriella Pession, Tom Wlaschiha, Moon Dailly and Richard Flood.

On Thursday, July 11th, NBC is set to debut two unscripted entries to its schedule, beginning with The Winner Is… at 9:00. Hosted by Nick Lachey, each episode features six acts that go head to head each week and sing for a shot at a $1 million grand prize, all the while avoiding cash distractions mean to push them out of the game. At 10:00 is Hollywood Game Night, hosted by Jane Lynch. The show features A-list celebrities partaking in a cocktail party atmosphere that is based on the real-life game nights of creator Sean Hayes. There’s been no announcement of the celebrities set to participate.

Do any of these three sound interesting enough to give a shot? What do you think is missing from broadcast television during the summer? Aside from America’s Got Talent, which of NBC’s summer shows do you think will do well?

Here’s an updated look at what NBC’s schedule will look like this summer:
Thursday, May 23rd
8:00/8:30 Save Me