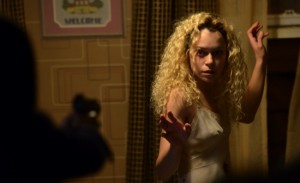 While Sarah would do anything to get Kira back into her life, swiping her from Ms. S and heading off to parts unknown with Felix is off the table for now. Taking her daughter without a word would only draw more attention to her absence and put Ms. S in a position that Sarah wouldn’t want to be herself, lost without the little girl that she’s grown so attached to. Sarah may be a lot of things to a lot of people (and on Orphan Black, a lot of people to a lot of people), but she doesn’t want to hurt Ms. S or make Kira feel anything less than 100% safe; by taking her daughter to who knows where, she’d be subjecting her to a life of paranoia, always running and checking over their shoulders for Ms. S or someone looking to take out yet another clone.

On the next episode of Orphan Black, Sarah’s chance to prove to Ms. S that she’s serious and stable enough to have Kira back in her life has been compromised by the reveal of the motorcycle driving Russian clone, responsible for the death of Katja. The survival of her fellow Orphans is predicated on tracking down the killer and finding out if she’s the original or working for somebody and why she’s hunting them down before taking her out for good. However, while Sarah’s using her natural street smarts and police cover to find the killer, the blonde is getting closer to the truth about who Sarah is, threatening her position on the force. Right now, the last thing that Sarah needs is to have her true identity exposed and access to the resources needed to figure out her origins cut off, so the impending showdown with the killer might have to be put off until a later date. Will Sarah be ready for when that day comes?

Will we see Sarah get Kira back this season? Who is hunting the clones and is it somebody we’ve already met? What would happen if Sarah’s cover was blown and her real identity exposed to those who know her as Elizabeth Childs?