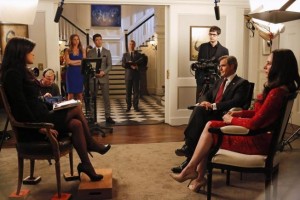 Victoria Grayson is a master at playing the public relations game. She’d have to be, of course, considering the activities of her family and those that surround them in the Hamptons, but still, that doesn’t take away from how well she knows how to handle the media. As evidenced by, for example, how she framed her “kidnapping” by the White-Haired Man, Victoria’s precision of thought and deliberateness of action can be quite a coup for her family, able to buy them enough public sympathy where their next scandal won’t completely crush them. However, she could also very easily crush Conrad if he pushes her far enough, something that has made the Grayson patriarch think twice about leaving his wife and/or putting her through the wringer of being a political wife. Coming up on Revenge, though, it looks like Victoria will be dabbling in the idea of bringing down her husband thanks to an interview on Nightline that turns out to be quite explosive.

Listed below are the dates, titles, and descriptions of the next two episodes of Revenge, including the season’s penultimate installment.

Sunday, April 28th – “Identity”
Desperate to find Padma, Emily, Aiden and Nolan must track down the Falc0n’s true identity and put a stop to the Initiative while Emily struggles with her future and Victoria fights her own battle after a very exposing interview on Nightline.

Sunday, May 5th – “Engagement”
Emily plots her next move in her new role as Daniel’s fiancee, while Aiden struggles with the re-engagement. Meanwhile, Jack learns more than he bargained for, and desperate times call for desperate measures as Conrad’s gubernatorial numbers slip after Victoria’s big reveal on Nightline.

Who do you think is the Falcon? Is Victoria deliberately going to tank her Nightline interview to impact Conrad’s campaign? Will Aiden break up with Emily over the re-engagement and his feelings toward Daniel?