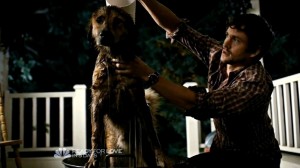 Probably the best thing going for Hannibal is the connection between the original work done by Thomas Harris and the series. Nobody knows the material he created better than Mr. Harris himself. For that knowledge alone, the series is worth a look. What else does it have going for it? A lot.

Hugh Dancy as Special Agent Will Graham is a standout. Although he has the title of Special Agent, he was never truly an FBI agent because he couldn’t make the cut. His mind, however, is capable of taking a crime scene and interlocking what happened with what is left in such a way that they would have been remiss to overlook him completely, thus the special status. It was an interesting dynamic to have a protagonist as mysterious as the antagonist, in this case, Hannibal Lector (Mads Mikkelsen), who we’ll get to shortly.

Very early in the hour Dr. Alana Bloom (Caroline Dhavernas) was asked to profile Will in the same way he would soon be asked to psychoanalyze the killer. She refused, stating the only way that would happen would be posthumously.

Of course, we all know the story of Hannibal Lector, the eater of people. Will determined quite quickly that whoever they were searching for was eating their victims and held some fascination, if not love, for the girls he was choosing. What he didn’t expect was for Agent Jack Crawford (Laurence Fishburne) to seek out a well known psychoanalyst in his own right, Dr. Hannibal Lector, to do the same to Will that Will was doing for the killer.

Will’s somewhat strange and off-putting personality, something he considered anti-social and borderline autistic, kept him from being the superstar FBI agent we would recognize from the movies, and it’s also what caused the FBI to do research on him before setting him free onto the case.

Will is the kind of guy who wouldn’t hurt a fly. Riding along side the road and finding a stray dog, he spent ages trying to coax him into his car, not to harm him, but to bring him into his home and make him a part of his family. Hannibal, on the other hand, would probably use the same coaxing skills to bring a girl home as dinner. They share such similar personalities and ultra intelligence but they’re used for utterly opposing purposes. 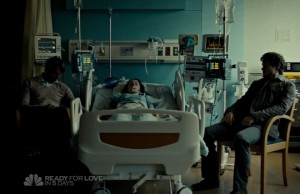 Hannibal knowing who his copycat was gave the show a distinct The Following feel, and I seriously hope the show doesn’t take that route. I’ve found the confusion of extreme violence and frakked up love to be unwatchable, but in the first rundown with Will and Hannibal working together, there is something more sinister going on. The final scene when Hannibal was in the hospital with his golden ticket, perhaps the daughter he never had, the more interesting the story became.

Hannibal seems as though it will be an elaborate game of cat and mouse where we are never quite sure who is the cat and who is the mouse as so many characters exhibit qualities of both species. The hour was a great introduction to two incredibly deep and awkward personalities. I wouldn’t even call Lector evil at this point, because he seems more broken than anything else. It’s my hope that part of the series will be digging into exactly who he is and why, and how someone like Will would not only listen to him but learn from him, as well as why the FBI would be unable to see what is right under their noses.

I think it’s going to be a fun, if a bit gruesome ride. It will certainly make eating meals a bit challenging. Liver and onions anyone?