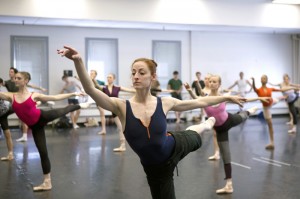 The CW has officially announced its first round of summer premiere dates, focusing primarily on shows that will be new to the network. Kicking things off on Tuesday, July 16th is a full night of programming, with the return of improv comedy series Whose Line is it Anyway? (now hosted by Aisha Tyler) at 8:00 and 8:30 and Perfect Score at 9:00 and 9:30. The latter is a dating series hosted by 90210’s Arielle Kebel that allows players to win money as well as love – if they can identify their perfect match following a series of compatibility tests.

Monday, July 29th will see the return of docu-series Breaking Pointe for a second season at 9:00. It follows the inner workings of an intensive Salt Lake City ballet company, showcasing the physical and emotional pressure the dancers are put under in the name of art. On Wednesday, July 31st, the series premiere of wilderness competition The Hunt will air; 12 teams of 2 will enter “The Arena,” a fenced-in enclosure in the middle of the wild, where they must live for one month and compete against each other for scarce resources. The winning team will receive $250,000.

Curiously absent from this round of premiere announcements is America’s Next Top Model, which was originally set to premiere its 20th cycle this summer.

Will you be watching anything on The CW this summer? How do you think Whose Line will fit on the summer lineup? What type of summer programming do you think The CW should be going after?