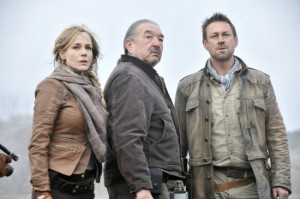 The way that alien invasions are depicted in sci-if, you never see the long-term aftermath. Sure, the arrival itself is shown, as is the violent struggle between the humans and the aliens for control of the planet, but things typically end with the invaders being defeated and life as we know it on Earth returning to normal. However, on Syfy’s Defiance, things aren’t quite that easy.

That’s because the drama, whose accompanying MMO third-person shooter will be released April 2nd, is centered around Earth following the arrival of seven unique alien races. Specifically, the show will look at the boom-town of Defiance, centered on what used to be St. Louis, Missouri, and how each of the races interacts with one another and with humans. While the ultimate goal is to co-exist peacefully,  festering resentment from humans and cultural clash among the aliens will make sure that the town of Defiance is never without a little conflict.

Defiance stars Grant Bowler (Blue Heelers) as Joshua Nolan, a former Marine and the Chief Lawkeeper of Defiance; Julie Benz (Dexter) as Amanda Rosewater, the Mayor of Defiance; Stephanie Leonidas (MirrorMask) as Irisa Nyira, an Irathient warrior who is Nolan’s adopted daughter and serves as his deputy; Tony Curran (Gladiator) as Datak Tarr, a Castithan and the right hand and chief advisor to Amanda; Jaime Murray (The Death of Ian Stone) as Stahma Tarr, Datak’s wife, who is also a Castithan; and Mia Kirshner (The L Word) as Kenya Rosewater, Amanda’s sister and the self-assured, dauntless proprietress of the Need/Want bar/brothel/gambling hall.

Producers for the show include showrunner Kevin Murphy (Caprica) and Michael Taylor (Battlestar Galactica), while Scott Stewart (Legion) is set to direct the pilot.

The two-hour series premiere of Defiance airs Monday, April 15th at 9:00 on Syfy. You can check out an additional trailer for the show here.

Will you be watching Defiance? What, if anything, are you expecting from the first season of the show? If the show succeeds, do you think we’ll see more transmedia events like this in the future?