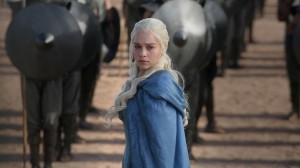 There is absolutely no doubt how much I enjoy watching Game of Thrones, but once I’ve had a chance to process the hour, I’m usually left wanting. There are so many characters and stories running parallel to each other that it’s difficult to do justice to them all, let alone with equal weight.

Take, for example, take the opening scene. For two years we’ve known that winter is coming, but it has yet to arrive. We’ve also known the wildlings were going to breach the wall, and now that Sam failed to release the crows, nobody will know what’s coming for them. Lord Commander Mormont shouted it loud and clear, their new message to the masses was to let them know that by the time winter ended, everyone would be dead.

That’s a bit dramatic, don’t you think? Winter hasn’t even arrived yet, and the wildlings have barely crossed the hearth of the wall, but he’s already calling it a done deal. Way to give up old man! The best part of his speech was Ghost, somehow still a part of the Night’s Watch and no longer at Jon Snow’s side, listening raptly as Mormont gave the men their marching orders. Any glimpse of a direwolf in Game of Thrones is a winning moment for me.

The battle of Blackwater left many dead and others scarred emotionally and physically. Tyrion is holed up in his new quarters, fearing death and wondering why Tywin has yet to visit his heroic son. When Cersei does dare to visit, two guards at her side, she needles Tyrion and mocks what he accomplished on behalf of King’s Landing. It’s no surprise some of the closest relationships Tyrion has made during the series have been with the Starks. His own family’s derision for him is pointless and hypocritical.

When he finally goes to see Tywin, Tyrion is not thanked for preparing King’s Landing for the assault, but instead blamed for it. For if he had not been born and killed Tywin’s wife, their lives would have all been different. Tywin is not a stupid man. Why does he focus on having a disabled son whose mother died giving birth to him rather than looking at his other two children, who are engaged in incest and have produced the most disgusting and vile king to ever rule? Yes, Joffrey, I’m looking at you. When you take Arya away from Tywin, he’s a tyrant. I was seeing him in a completely different light when she was serving him at Harrenhal.

Tywin’s inability to give Tyrion the respect he deserved chalked up the end of any compassion I had for Tywin. It also made me want to pick up the darn books again, which I had chosen not to do because keeping the books and series differentiated was becoming so difficult.

Daenerys’ search for an army grows on, as she has persuaded some of her Dothraki people to travel with her across the poisoned water. I can’t wait for a scene when all three of her dragons are together, because even one just blows me away. Dragons! Dany’s a great leader because her strength, determination and compassion keep her humble enough to know when an army is being mistreated, but brave enough to know she can do better by them and make them into men who will earn a new and highly regarded life under her command. Ser Jorah is always by her side giving her advice that feeds her in ways others wouldn’t be capable. Their friendship, which it appears will one day become more than that, is one of my favorites.

The Unsullied army seem quite lucky to have fallen into the hands of Dany. After the man who trained them, and finds that ripping their nipples off as an example of the mastery of said training is acceptable, lets them go, it would seem they might follow Dany and her more caring ways of treating those who serve her to the ends of the earth. That’s exactly the kind of army Dany needs to win the Iron Throne.

As Sansa has been cast aside by Joffrey in place of Margaery, I find myself unsure whether to like or dislike the latter. Margaery seems just cunning enough to be likeable. Nobody who wants to marry Joffrey and still visits orphans with a smile on her face can be in their right mind, but I believe she has bigger plans for herself. It seems she will be a giant thorn in the side of the Lannisters and she’ll be able to smile her way out of it without truly offending any of them. Winning the love of the people is a perfect start, especially doing so in the place where Joffrey was once attacked.

She has set her sights on becoming queen, but that doesn’t mean she can’t do good as queen, unlike the Lannisters have done during their realm.

As I said earlier, there are so many short bits during hour that are mere glances in comparison to other storylines. Davos found his way back to Stannis, only to be marked as a servant of darkness and thrust into the dungeons. Stannis is a freaking nutcase. We saw a glimpse of Jon as he asked to join Ygritte’s people, but the story stopped there. Robb and Talisa were at Harrenhal and it was destroyed. All we learned from the scene was Robb is treating Catelyn as a prisoner for setting Jaime free. With Brienne at his side, I think Jaime may be the one hope we have left, other than Tyrion, for the Lannisters.

As I watch Game of Thrones, I like to imagine a team from the different realms who would work well together to run all seven kingdoms. Tyrion and Dany are on my must have list at the moment. We’ll see who else makes the cut as the season(s) progress, and who might fall off.

All in all, not a bad premiere, but if they’re going to focus on three main storylines, them focus on them. There wasn’t a need to interrupt with Robb in this episode, nor with Stannis and Davos, for that matter. Sometimes the sheer enormity of what they try to squeeze into one episode makes it feel disjointed, instead. The bits with Tyrion, Joffrey and Margaery and Dany were brilliant and exactly what I’d expect from Game of Thrones.